Your employer might already asked you to return to office, and probably you have spend about eight hours a day in office. Maintaining that type of sedentary lifestyle isn’t doing your waistline any favors. In fact, most people focus entirely on the physical aspects of weight loss, like diet and exercise, but do you really have ideas how and what you shall eat?

Luckily, there are plenty of eating tips you can do at the office to both reverse the effects of an office lifestyle and lose weight at the same time. Follow these tips, and you could end up seriously whittling your waist.

1. Swap Out Your Morning Coffee for Green Tea

Coffee might give you a caffeine jolt in the morning, but green tea can supply less jittery energy—and plenty of fat-burning qualities. Many studies found teas—including green teas—contain catechins that boost fat oxidation. Plus, Taiwanese researchers found that the 1,100 people they studied over 10 years who drank green tea had 20 percent less body fat than others who didn’t drink it. Tea is so powerful for weight loss and general health.

2. Bring Your Lunch —Every Day

Think you know how many calories are in that fast-food meal you grabbed during your lunch hour? Think again: the average takeout meal ordered by adults contained an average of 836 calories. Calorie counts listed on menus help, but the study showed adults underestimated the number of calories by about 175 per meal. That can add up to a serious amount of weight each year.

Instead, spend part of your weekend meal-prepping for the week ahead. Opting for even a 500-calorie meal during your lunch break can save you more than 300 calories over the average grab-and-go meal—a difference of 1,500 calories for a five-day workweek. Work an average of 50 weeks a year and that’s 75,000 fewer calories consumed, or about 10kg a year!

Remember the Boy Scout motto about always being prepared? At 40 or older, you most likely have more things demanding your time and attention than ever before. To make it easier to eat lower calories and avoid stuffing your face when you’re starving, always keep your desk, car, and purse stashed with healthy snacks. And whatever you do, do not hit up any vending machines!

4. Keep the Sweets Out of Sight 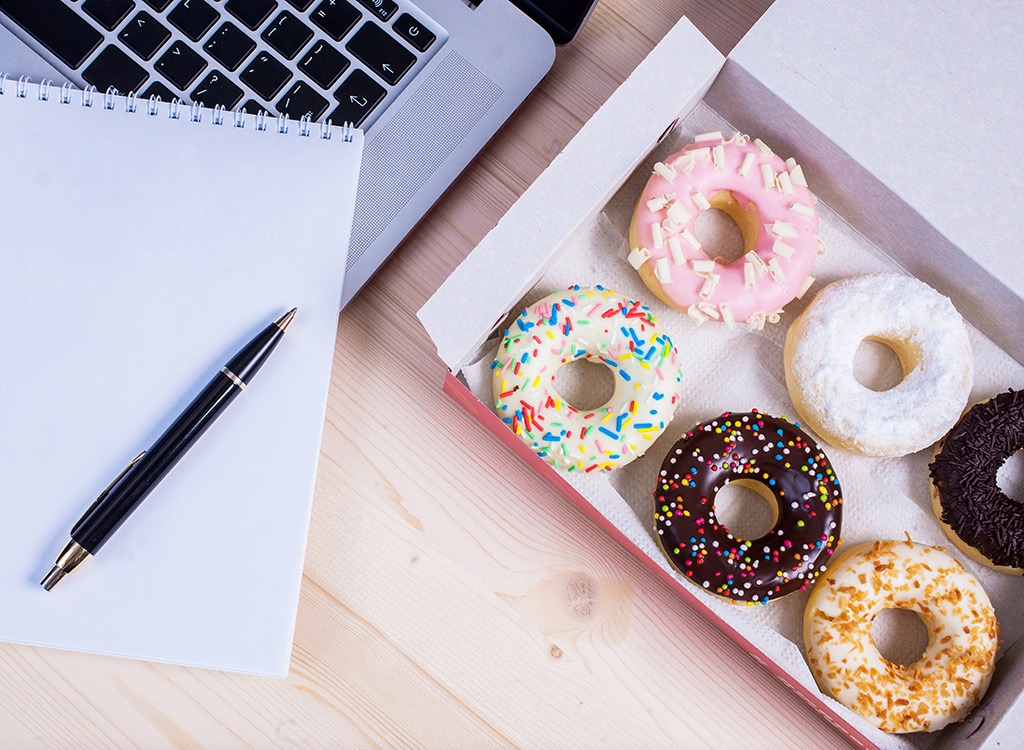 Out of sight, out of mouth? Simply reorganizing your pantry’s “top hits” could translate into serious calorie savings, according to researchers at Google. A study, conducted at the search engine’s New York office dubbed “Project M&M” found that placing chocolate candies in opaque containers as opposed to glass ones, and giving healthier snacks more prominent shelf space, curbed M&M consumption by 3.1 million calories in just seven weeks. A similar study published in the Journal of Marketing found that people are more likely to overeat small treats from transparent packages than from opaque ones.

Spanish researchers found that obese women who ate their lunch after 3 p.m. lost 25 percent less weight than those who ate their lunch earlier in the day. Even though both groups ate the same foods and the same amount of calories, the early bird diners lost five pounds more. Scientists believe that waiting to eat until you’re starving may spark cravings for more food later in the day.

6. Analyze if You’re Comforting Yourself With Food

Whether you stuff yourself when you get home from work because you hate your job or you slip out for a fattening “coffee” drink after your boss laid into you about something minor, be sure to take stock of how your job makes you respond with food. In some health surveys, only 10 percent of people listed their psychological well-being as part of their weight loss journey. The problem? Not being in tune with your emotions and their connection to food is why nearly 66 percent of people gain weight back after losing it. Because most people focus almost entirely on the physical aspects of weight loss, like diet and exercise. But there is an emotional component to food that the vast majority of people simply overlook and it can quickly sabotage their efforts.